Go Pros are great for shooting extreme sports and dangerous action shots.
But they often lack the “glamorous” look most families want in a wedding video.

But I always thought they might work hidden around the altar to catch brief moments a big camera wouldn’t fit in. Like behind the candles or over an archway.

Most of the time when the wedding couple is doing something like lighting the unity candle or the sand ceremony or the “Wedding Lasso” their backs are to the audience. And thus, their backs are to my cameras. Who wants to look at THAT?

About 2 years I had one of my “real” cameras behind the “Unity Candle” it looked great on video but it was kind of a distraction in the moment.

This was from a small digital camera hidden in the ceiling.

You certainly wouldn’t want to look at THAT for the whole wedding video, but it’s an acceptable cut away shot.

In addition to my “real” cameras, I tucked my Samsung phone in the bushes behind the altar for THIS shot: 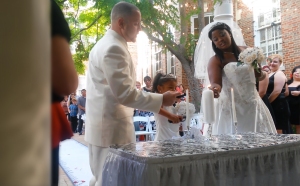 Advancing technology in all things, especially micro cameras, are making my job a LOT easier! I can use multiple cameras and not have to charge my couples any more money!

For my next weddings I plan on using more micro cameras to get lots of unique camera angles.

“In any creative endeavor, if you see someone doing something you like- copy it! Because I assure you- They did!”

I just typed in “gopro wedding video ” to start my research. Some of the results were just silly, but some were brilliant. All were though provoking.

It’s interesting but I think THAT much fisheye is too much for a whole ceremony. You can see they also used a traditional dslr for other footage.

A good Go Pro on high end drone looks fabulous! ( Reminder! I am NOT claiming I made these!).

A Go Pro hidden in the brides bouquet?!?!? How clever!

I am SO jealous I didn’t think of this!!!